The architecture and design of the early years of the 20th century were permeated with a new moral sensibility that evolved from the teachings of earlier reformers such as William Morris and John Ruskin. Opposing the heavy ornamentation of the High Victorian style, designers aligned to the new movement pursued a more thoughtful approach to design that was for the most part based on the concept of utility with beauty.

By the early 1900s it was realised that, while William Morris’ rejection of the machine was economically unsustainable, mechanised production should only be used for appropriate tasks and should not be employed to imitate handicraft.

Morris was born to a wealthy middle-class family. He came under the strong influence of medievalism while studying Classics at Oxford University, there joining the Birmingham Set. After university, he trained as an architect, mand developed close friendships with Pre-Raphaelite artists Edward Burne-Jones and Dante Gabriel Rossetti and with Neo-Gothic architect Philip Webb. Webb and Morris designed Red House in Kent where Morris lived from 1859 to 1865. In 1861, Morris founded the Morris, Marshall, Faulkner & Co decorative arts firm with Burne-Jones, Rossetti, Webb, and others, which became highly fashionable and much in demand. The firm profoundly influenced interior decoration throughout the Victorian period, with Morris designing tapestries, wallpaper, fabrics, furniture, and stained glass windows. In 1875, he assumed total control of the company, which was renamed Morris & Co.

Morris is recognised as one of the most significant cultural figures of Victorian Britain. He was best known in his lifetime as a poet, although he posthumously became better known for his designs. The William Morris Society founded in 1955 is devoted to his legacy, while multiple biographies and studies of his work have been published. Many of the buildings associated with his life are open to visitors, much of his work can be found in art galleries and museums, and his designs are still in production.

Forward-looking designers such as Charles Rennie Mackintosh had to battle against the conservatism of mainstream taste and generally found that their ideas and designs were better received on the continent than in Britain. This led to the New Movement on the continent which inspired the Arts & Crafts and Art Nouveau styles.

Mackintosh lived most of his life in the city of Glasgow. Located on the banks of the River Clyde, during the Industrial Revolution, the city had one of the greatest production centres of heavy engineering and shipbuilding in the world. As the city grew and prospered, a faster response to the high demand for consumer goods and arts was necessary. Industrialized, mass-produced items started to gain popularity. Along with the Industrial Revolution, Asian style and emerging modernist ideas also influenced Mackintosh’s designs. When the Japanese isolationist regime softened, they opened themselves to globalisation resulting in notable Japanese influence around the world. Glasgow’s link with the eastern country became particularly close with shipyards building at the River Clyde being exposed to Japanese navy and training engineers. Japanese design became more accessible and gained great popularity. In fact, it became so popular and so incessantly appropriated and reproduced by Western artists, that the Western World’s fascination and preoccupation with Japanese art gave rise to the new term, Japonism or Japonisme.

This style was admired by Mackintosh because of: its restraint and economy of means rather than ostentatious accumulation; its simple forms and natural materials rather than elaboration and artifice; the use of texture and light and shadow rather than pattern and ornament. In the old western style, furniture was seen as ornament that displayed the wealth of its owner and the value of the piece was established according to the length of time spent creating it. In the Japanese arts furniture and design focused on the quality of the space, which was meant to evoke a calming and organic feeling to the interior. 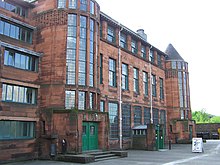 At the same time a new philosophy concerned with creating functional and practical design was emerging throughout Europe: the so-called “modernist ideas”. The main concept of the Modernist movement was to develop innovative ideas and new technology: design concerned with the present and the future, rather than with history and tradition. Heavy ornamentation and inherited styles were discarded. Even though Mackintosh became known as the ‘pioneer’ of the movement, his designs were far removed from the bleak utilitarianism of Modernism. His concern was to build around the needs of people: people seen, not as masses, but as individuals who needed not a machine for living in but a work of art. Mackintosh took his inspiration from his Scottish upbringing and blended them with the flourish of Art Nouveau and the simplicity of Japanese forms.

While working in architecture, Charles Rennie Mackintosh developed his own style: a contrast between strong right angles and floral-inspired decorative motifs with subtle curves, e.g. the Mackintosh Rose motif, along with some references to traditional Scottish architecture. The project that helped make his international reputation was the Glasgow School of Art (1897–1909). During the early stages of the Glasgow School of Art Mackintosh also completed the Queen’s Cross Church project in Maryhill, Glasgow. This is considered to be one of Charles Rennie Mackintosh most mysterious projects. It is the only church by the Glasgow born artist to be built and is now the Charles Rennie Mackintosh Society headquarters. Like his contemporary Frank Lloyd Wright, Mackintosh’s architectural designs often included extensive specifications for the detailing, decoration, and furnishing of his buildings. The majority if not all of this detailing and significant contributions to his architectural drawings were designed and detailed by his wife Margaret Macdonald[10] whom Charles had met when they both attended the Glasgow School of Art. His work was shown at the Vienna Secession Exhibition in 1900. Mackintosh’s architectural career was a relatively short one, but of significant quality and impact. All his major commissions were between 1895[11] and 1906,[12] including designs for private homes, commercial buildings, interior renovations and churches.